Posted on September 18, 2017 by markwilliment 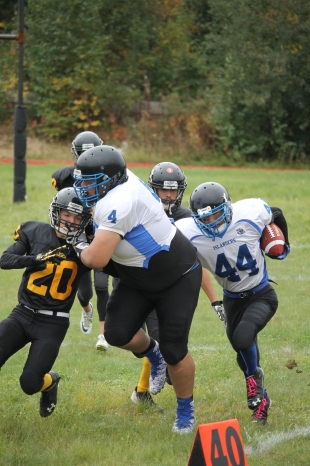 Northern Saskatchewan Football continued its season with three decisive games and another match was postponed due to wildfires. We are planning to have two teams play twice next week.

The Cumberland House Islanders had an extra week of practice with their first game of the season postponed in week #1. On Wednesday, September 13 they certainly demonstrated their preparation in Pinehouse both on the offense and defense. The Cumberland House squad score 13 touchdowns including six by Nigel Cook as they rolled past the Pinehouse Lakers by a score of 84-6. The following day, the Beauval Voyageurs travelled to the Lac La Ronge Indian Band to play the Senator Myles Venne Huskies. The Huskies were also playing their first game of the season. Still, the visiting Voyageurs were too much for the Huskies, as Hilliard Roy scored 5 touchdowns in a 59-0 shutout win for Beauval.

One six aside game was postponed due to wildfires. The Sandy Bay T-Wolves were to travel on September 13 to play the Creighton Kodiaks. This game will be played next week.

On Friday, September 15, the first ever 9-aside northern home game was played at the Churchill Chargers field in La Ronge as they hosted the Tisdale Tornados. The La Ronge team wanted to continue their winning ways in the second of a home and home series. Similar to the game in Tisdale, the La Ronge Churchill Chargers continued to play tight defensively and took advantage offensively when opportunities arose. Justin McKerracher scored two touchdowns, Frithz Culig scored one and quarterback Jacob Glover had the highlight of the night by avoiding a safety in his own end zone and managing to break loose, running the length of the field to score a touchdown himself. The final score in the game was La Ronge Churchill Chargers 41-6 over the Tisdale Tornados.

Looking ahead at week three of Northern Saskatchewan Football, two teams who have not played this season will play two games each on Monday and Friday. On Monday, September 18, Sandy Bay will travel to Creighton for each to play the first game of the season. After the SHSAA regulation of four days rest, Creighton will host Pinehouse while to Sandy Bay will host Senator Myles Venne on Friday, September 22. Beauval will play in Cumberland House on Wednesday, September 19. In 9-aside action, La Ronge will hope to extend its winning streak to three games when they host Nipawin on Friday, September 22. Good luck and safe travels to all teams.

Have a great week!