Posted on September 25, 2017 by markwilliment 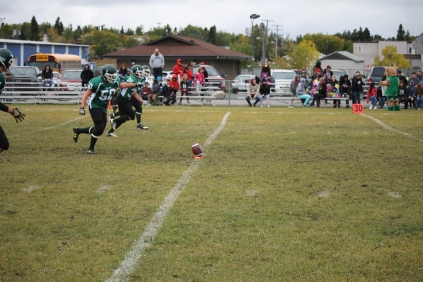 Northern Saskatchewan Football played its third week of the season with two teams playing twice to make up for previous games postponed due to wildfires.

Kicking off their delayed season on September 18, Sandy Bay T-Wolves travelled to Creighton to play the Kodiaks. A close, high scoring affair, Creighton pulled off the win by a score of 69-55. Highlighting play in this game was Creighton’s rookie kicker, Blake Alexander who kicked seven converts, a field goal and two singles. It is not usual for kicking to be prolific in six aside football, with this being the first field goal in nearly two seasons.

The Cumberland House Islanders continued their winning ways on Wednesday, September 20 when they hosted the Beauval Voyageurs. A formidable defense and six touchdowns by Cumberland’s Seth Sanderson paced the hometown Islanders to a 54-0 shutout. On Friday, September 22 the Pinehouse Lakers played in Creighton in a game that was closer than what the score would indicate. Once again, Creighton’s Blaine Alexander demonstrated exceptional kicking skills by converting on eight touchdowns, and adding a single on a missed field goal. Creighton won the game by a score of 65-14. A little later on Friday, hometown Sandy Bay T-Wolves shutout Senator Myles Venne Huskies from the Lac La Ronge Indian Band by a score of 50-0. In 9-aside action, the La Ronge Churchill Chargers lost their first game of the season to the Nipawin Bears by a sore of 35-20.

Looking ahead at week four of Northern Saskatchewan Football, three six-aside and one nine-aside game are scheduled. Beginning on Wednesday, September 27, Senator Myles is travelling to Pinehouse. On the following day, Sandy Bay will be in Beauval and in a battle of the two unbeaten teams, the Creighton Kodiaks will be playing in Cumberland House to determine first place. Friday September 29 will see the La Ronge Churchill Chargers try to get back to their winning ways when they host the team from Humboldt.

Good luck and safe travels to all teams.