Regular Season Wraps up After Fifth Week of Action 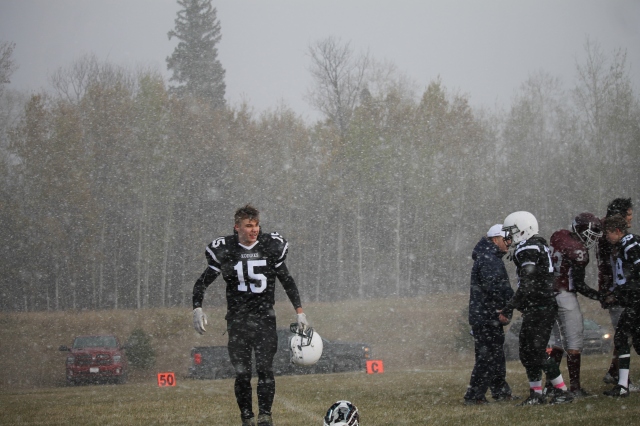 Creighton Kodiaks Noah Dickens #15 after a convincing win over Beauval

The final week of Northern Saskatchewan Football had several lop sided games as teams played their entire rosters either in preparation for the coming season or in the case of Sandy Bay and Cumberland House, for the upcoming championship game.

Kicking off the week on October 3,  in a chilly Beauval, the visiting Creighton Kodiaks shutout the hometown Voyageurs by a score of 64-0. Blake Alexander led the way in scoring with a couple touchdowns and kicking several converts. Noah Dickens added a touchdown himself, as the Kodiaks finished the season in third place and out of the playoffs.

Later in the evening, Sandy Bay T-Wolves played the La Loche Lakers at the Max Clunie Field in Prince Albert. Sandy Bay played their entire roster, including a first ever touchdown for Logan Morin. Cory Spencer added another touchdown for the T-Wolves and finished the season as the leading score of the northern conference. Gino Clarke had been given clearance earlier in the week to play his first ever football game and scored a touchdown himself for the La Loche Lakers. The final score was 76-7 for Sandy Bay.

The final 6-aside game of the season was played on October 4, in Cumberland House. The defending champion Islanders were looking for a 5-0 season. The Islanders were convincing in front of the many hometown fans as they defeated the Pinehouse Lakers 75-0. Islander, Dwayne McKenzie kicked a record 9 converts on all Cumberland touchdowns in that game.

In 9-aside action, the Nipawin Bears shutout the La Ronge Churchill Chargers by a score of 25-0.

Looking ahead, the Northern Saskatchewan Football championship game will be on October 20, 2018 at the Max Clunie Field. The Cumberland House Islanders are looking to repeat as the Ralph Pilz Trophy winners. The Sandy Bay T-Wolves, in their first ever appearance in the championship game, are determined to take the trophy back to their community. More details on the upcoming game in the next post. In 9-aside action this week, the La Ronge Churchill Chargers are travelling to Melfort to play on Friday.

Have a great week.